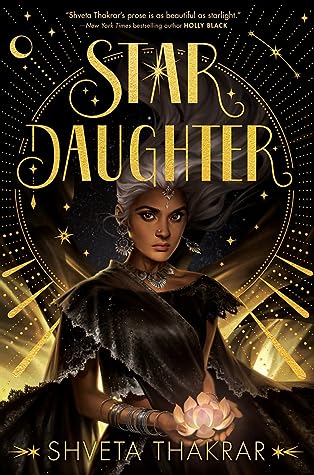 This week I am waiting on
Star Daughter by Shveta Thakrar

Goodreads Summary
The daughter of a star and a mortal, Sheetal is used to keeping secrets. But when a flare of starfire injures her human father, Sheetal needs a full star’s help to heal him. A star like her mother, who returned to the sky long ago.

Sheetal’s quest will take her to a celestial court of shining wonders and dark shadows, where she must act as her family’s champion in a competition to decide the next ruling house of the heavens—or risk never returning to Earth at all.

Neil Gaiman’s Stardust meets a rich landscape of Hindu mythology and celestial intrigue in this sparkling YA fantasy debut.

You had me as soon as I read daughter of star and mortal. That concept sounds so fascinating and I can only imagine the wonders that can come with this idea, especially when you factor in a quest to a celestial court of shining wonders. I am already hyped for this book, and you guys should be too.