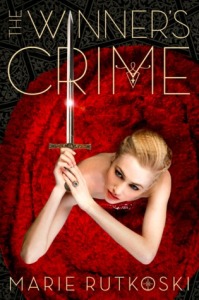 The Winner’s Crime (The Winner’s Trilogy #2) by Marie Rutkoski
Publication Date: March 12th 2015 by Bloomsbury Children’s (UK)
Rating: 4.5 Stars
Genre: Young Adult, Fantasy, Romance.
Find: Goodreads | Amazon
Goodreads Summary
Lady Kestrel’s engagement to Valoria’s crown prince calls for great celebration: balls and performances, fireworks and revelry. But to Kestrel it means a cage of her own making. Embedded in the imperial court as a spy, she lives and breathes deceit and cannot confide in the one person she really longs to trust …

While Arin fights to keep his country’s freedom from the hands of his enemy, he suspects that Kestrel knows more than she shows. As Kestrel comes closer to uncovering a shocking secret, it might not be a dagger in the dark that cuts him open, but the truth.

Lies will come undone, and Kestrel and Arin learn just how much their crimes will cost them in this second book in the breathtaking Winner’s trilogy.

The Winner’s Crime is a painful but intricately constructed sequel to The Winner’s Curse. The book focuses on the aftermath of the events in the first book. The stakes are higher, relations are at breaking point, and we see our characters navigate and adjust to the new reality their choices have put them in. It’s a book that will tear your heart into pieces but also highlights the complexities of human nature and the lengths we’d go to to protect those we love.

Kestrel is the shining star of this series and The Winner’s Crime highlights just how selfless she is. Throughout this book we see Kestrel continuously deny herself the thing she wants most. Her longing and loneliness is palpable but she can’t afford to let those feeling show. Her life in Valoria is more like a prison. Everyday Kestrel plays the part assigned to her by the emperor. She can’t let her mask slip because if she does, the consequences are dire. The stakes in this book are high as the Valorian and Herrani remain at odd and the tension between these people threaten to destroy the rocky peace Kestrel sacrificed so much to secure. Kestrel’s cunning mind is still highlighted as her greatest strength as she navigates her way through court life and uses her position as a way to help those who need it. It’s a dangerous game to play but her dedication to the cause is admirable.

We also learn a lot about the Herrani in this book. Having secured their freedom, Arin now has to hold it. For Arin, this book focuses on his role as a leader of Herran. To his people, Arin is a natural leader, but to him it’s not a role he’s accustomed to and we see him adjust to this position in this book as he is forced to take part in the political maneuverings. However, Arin’s heart remains with Kestrel and when it comes to her his actions are impulsive, reckless and incredibly frustrating. With Kestrel pushing him away, and breaking her heart in the process, Arin’s conflicting emotions made him blind to the truth Kestrel so desperately wanted him to see.

The romance in this book hits a stand still. That doesn’t mean that the feelings between Kestrel and Arin vanish. They are very much real and present in this book but the circumstances of their situation means that they cannot act on those desire. There’s a lot of longing in this book and it’s this combination of longing and loneliness that makes The Winner’s Crime so tragic. Being together would have devastating consequences on both the Herrani and Valorians ,but denying themselves the opportunity to be together tears Kestrel and Arin apart.

However, this book is not just about Kestrel and Arin as our secondary characters also have a role to play in this tale. General Trajan, Kestrels father, has a very strong presence in this book and the dynamic between him and Kestrel was one of the most interesting aspects of this book. Kestrel loves her father but she sees the world differently to him, and with that she hopes that, regardless of their differences her love for him is reciprocated. His approval holds a lot of weight to Kestrel and that makes the actions in the closing chapters of this book all the more heart breaking.

We also see a lot more of the Emperor in this book. Kestrel has met her match in him. He is observant, cruel and manipulative. He sees people as pawns in his game. He respects Kestrel’s intelligence but is keen to remind her that he is the one in control. The tension between them is eminent. However, Kestrel does find an unlikely ally in Verex, the Emperor’s son and her future husband. Her interactions with him serve as a reminder of how the Emperor unabashedly manipulates everyone in his household. Verex and Kestrel understand the type of man he is and with that they create a united front. Verex was an unexpected yet pleasant addition to this book.

The characters are well and truly at the heart of this book but The Winner’s Crime also does a phenomenal job at developing the world were in. We come to understand more of the mechanisms and dynamics between the Herrani and Valorians. We are also introduced to the Dracan and Rutkoski does a incredible job at highlighting the differences between these races. The relationship between these three races are full of tension and mistrust but it’s also here we get to see the political intricacies take shape as the lines between friend and foe blur.

The Winner’s Crime is an emotional journey. The heartache, loneliness and constant pain makes you question whether there is hope for Arin and Kestrel as their paths continue to draw each other away from one another. The ending serves as a cruel reminder that no one in this world is safe and that all actions have consequences.

17 thoughts on “Review: The Winner’s Crime by Marie Rutkoski”