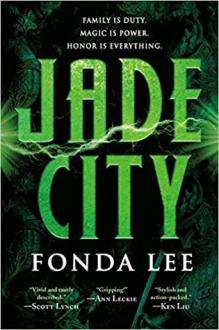 Jade City is the thrilling first instalment to Fonda Lee’s Green Bone Saga. Set on the island of Kekon, Jade City dives straight to the action as readers are introduced to an explosive clan war, as vengeance, greed, and power threaten to shatter the fragile peace that has long brought order and prosperity to the city of Janloon.

The island of Kekon is lucrative for its production of Jade, a precious gemstone that can enhance the senses of Kekon’s Greenbones, individuals that can harness the power of the stones. Jade is Janloon’s greatest source of power, but with power comes conflict, one that tore the clan in half, leaving a scattered legacy in the Mountain and the No Peak clan. These two clans are responsible for the safeguarding of Jade, but when conflicts turn into violence and greed turns into an opportunity, this fragile peace lies on the brink of destruction.

At the heart of the No Peak clan are the Kaul siblings, who hold the shared burden of protecting and preserving the influence of the No Peak clan. As the eldest, Lan leads the No Peak as its Pillar. He’s a man of logic and compassion. The businessman and leader who seeks reasons in place of war, but plagued by doubts on his leadership abilities. Hilo is the Horn, the ferocious warrior tasked with upholding peace on the streets on Janloon. He’s charismatic and highly skilled, qualities that inspire loyalty in his men, but leads by emotion, which often leads to trouble. Shae is the youngest Kaul and as the only daughter seeks to build a life beyond the confines of the male-dominated clan. The relationship between the Kauls is complex at best as the burden of upholding the Kaul legacy weighs on them collectively. It’s a dynamic that is honest and real as their fiery personalities and expectation frequently lead to conflict and resentment. However, beneath the hurt is a deep love and fierce protectiveness of one another, grounding them in their loyalty. The Kaul siblings have one of the most compelling dynamics in literature, treating us to flawed characters that try their best to uphold the clan while staying true to themselves.

Jade City also has an impressive cast of supporting characters that offer a unique perspective on the clan war. However, through them, we also explore wider themes such as homosexuality, cultural conflicts, and female empowerment.  The women in Jade City are equally as complex as their male counterparts as they manoeuvre their way through the social and political hierarchy that has long-established order in the city of Janloon. These women are ferocious, compassionate, ambitious, and have an astute awareness of the consequences of war, making them an integral part of this conflict. Hopefully, the sequel will continue to build on their influence.

In fantasy, it’s easy to rely on the spectacle of magic and adventure. However, Jade City instils a rich understanding of humanity, giving weight to the actions of our characters and the consequences of their choice, often leading to betrayal, regrets, and heartbreak. The sensory enhancing Jade further accentuates the humanity of these characters as it grounds them with a strong perception and understanding of themselves and those around them. This novel sets the scene for a large scale conflict, one that is guaranteed to have global and personal consequences as the scope of this world continues to expand beyond the confines of Kekon. Fortunately, Lee’s writing is immersive and consistent, keeping the story at a steady pace that will have you at the edge of your seats without forgetting the intimacy of small moments.

In short, Jade City is a thrilling and inventive fantasy that excels in balancing the elements of humanity, scope, and perspective. It’s masterful in its insightful introduction to the history of Kekon, the power of Jade, and the internal and external tensions that arise along the way without overwhelming its readers with its sheer complexity. Jade City is worth every minute of your time and more.

What did you think of the Jade City?
Who’s your favourite Kaul sibling?

Find: Goodreads | Amazon
Summary
JADE CITY is a gripping Godfather-esque saga of intergenerational blood feuds, vicious politics, magic, and kungfu. The Kaul family is one of two crime syndicates that control the island of Kekon. It’s the only place in the world that produces rare magical jade, which grants those with the right training and heritage superhuman abilities.
The Green Bone clans of honorable jade-wearing warriors once protected the island from foreign invasion–but nowadays, in a bustling post-war metropolis full of fast cars and foreign money, Green Bone families like the Kauls are primarily involved in commerce, construction, and the everyday upkeep of the districts under their protection.
When the simmering tension between the Kauls and their greatest rivals erupts into open violence in the streets, the outcome of this clan war will determine the fate of all Green Bones and the future of Kekon itself.