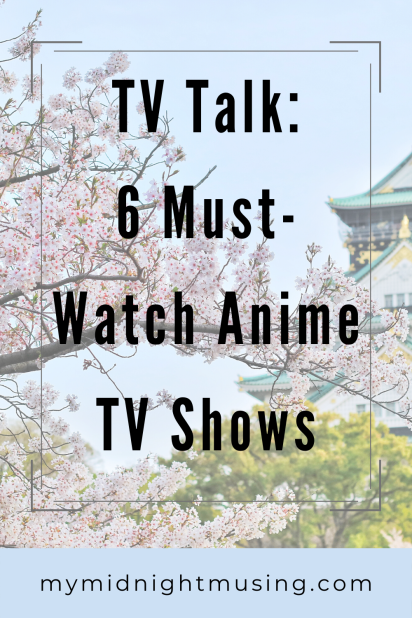 Anime has never been more accessible than it is these days as its popularity reaches new heights, solidifying its place in mainstream media. Now, in years past anime was like a niche market, often grouped with the likes of horror movies and comics and used as a punching bag for those who deem them lesser than traditional mainstream entertainment sources. Anime is not for everyone and that’s fine. However, even if you’ve never watched an anime show or movie, having the openmindedness to appreciate its cinematic value can introduce you to a whole new world of storytelling, one where a medium merges the concept of fantasy and reality with breathtaking artwork that heightens the visual experience. You don’t have to be a devout fan of the genre to appreciate it either, but if you think anime is a one-trick pony, think again. Whether you just want to appreciate the artistry of anime or looking for an intellectual/emotional/dark/feel-good story, there’s something for everyone. Now, I’m no expert in the field, but if you want to try your hand at anime, these six shows are a good place to start.

Perhaps it’s this writer’s affinity for water sports that make this show so compelling, but Free is a brilliant exploration of friendship and brotherhood in the world of competitive swimming. Its dramatic narrative is led by the classic friends turned rivals trope. However, beyond the competitive nature of these characters lies a deeper tale of loss and friendship. While natural competitors, the history between these characters are defined by a shared love of water. It’s easy for a show to single out one character as the lead, but the beauty of Free is that this role is shared by 5 guys who carve out their own identity on the show. It’s an example of how, despite their differences, they’re style and personality balance one another, treating viewers to a journey that sees them grow as individuals and the impact it has on the dynamic of their friendship.

Even if you’re not an anime fan chances are you’ve heard of Attack on Titan. Since its debut in 2013, Attack on Titan’s popularity has soared, with John Boyega being one of the shows high profile followers. It’s easy to see why this is such a beloved show. Set in a world that lives in fear of giant man-eating titans, Attack on Titan spotlights the fight to live beyond the confines of the walls that keep humanity safe and the power dynamics that arise within and beyond their society. It’s a bleak and dark tale, one that visually strikes a sense of dread into the heart of viewers. However, it’s in that bleakness that we see the resilience of determination and the spirit hope as our characters refuse to cower from the threat of these beings. The question is, do they sacrifice their own humanity to save their world?

Easily one of the most uplifting shows of all time, Yuri on Ice is perfect if you’re looking for a light-hearted underdog story with plenty of heart. Following, his embarrassing defeat at the Grand Prix Final, Yuri Katsuki returns to his hometown of Hasetsu to reassess his figure skating career. After an online video of Yuri skating captures the attention of world-renowned skater Victor Nikiforov, he takes it upon himself to coach Yuri, reviving his figure-skating career. Along the way, we meet Yuri’s most formidable competitors and are introduced to the fascinating world of competitive skating. However, the heart of the show lies in the budding relationship between Yuri and Victor. It’s a relationship that’s sincere in its development and is a testament to their growth as individuals as both Yuri and Victor come to respect each other as equals both professionally and personally. Sure, the animation isn’t the cleanest, but the story between this pair of skaters carries the show in its heartfelt sincerity.

Fans of murder mysteries and the supernatural will love this show. Granted the many plot threads do sometimes get lost in translation, but overall this was a solid first season. The crux of the story focuses on the aloof Detective Keith’s hunt for the elusive killer B, a murderer who’s blood trail left a personal mark on the detective. Accompanying Keith on this case is a compelling and energetic group of detectives that have their own part to play in this tale. The supernatural elements become more relevant in the latter half of the season and if future seasons can find a cohesive balance between this police drama and its supernatural elements viewers will be in for a treat.

The stunning artwork is reason enough to watch the show. This breathtaking piece of art is visually striking and emotive. It’s a show that emphasises the power of words. Violet Evergarden was raised as a weapon, therefore, her concept of emotions is limited. With her one ally becoming a casualty of this war, Violet is left with the need to reconcile her own grief while coming to understand the many ways words are used to enhance the relationships in our lives. It’s layered and breathtaking in its execution, and while the “case of the week” episodes might not suit everyone, the format allows us to appreciate Violet’s growth throughout the season as her own understanding of emotions giving us an insight into her character. Accompanying the show is a breathtaking soundtrack that gives weight to the emotion carried throughout the show, reminding us of our humanity by communicating our thoughts and feelings through letters.

Looking for a fresh take on the legend of Dracula? Look no further than Castlevania. Led by Richard Armitage, this all-star cast takes us on an apocalyptic journey where a grief-ridden Dracula condemns the human race to their doom. In a shocking turn of events, Dracula comes across as a sympathetic character, one that was willing to change and embrace humanity, only for humans to take the life of the woman he loved, signing their fates. To stop Dracula, we have an ousted monster-hunter, Trevor Belmont, magician Sypher, and Dracula’s half-human son, Alucard, a team of reluctant allies that understand the dire consequences of Dracula’s plan for humanity. The show also provides a fascinating insight into vampire politics and the rising influence of zealot cults. It’s a fresh take on vampire lore, one that doesn’t hold back on the darkness that lingers in the background of this bleak world.

*Note: If you’re wondering why classics like Death Note, Naruto, Fullmetal Alchemist, My Hero Academia etc aren’t on the list, it’s simply because I’ve not watched them.*

What are your thoughts on anime?
What’s your favourite anime of all time?