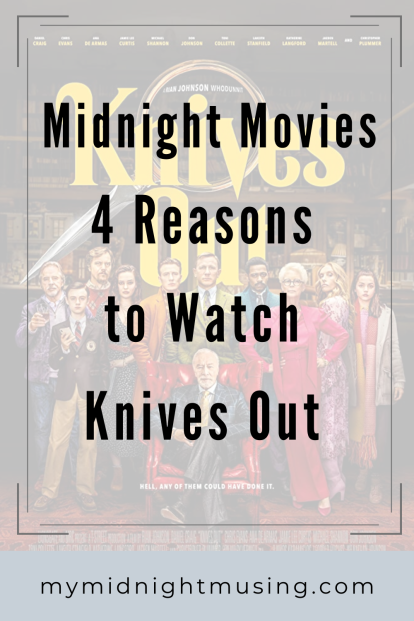 Perhaps one of the most surprising hits of 2019, Knives Out is a brilliant whodunit that has quickly become one of the most engaging murder-mystery films to hit the big screen. Its box office acclaim has already secured a sequel, meaning fans will soon get to immerse themselves in the follow-up to this thrilling murder-mystery. If you’ve yet to see this film, here are 4 reasons why Knives Out should be your next movie night viewing.

We know him as James Bond, but Daniel Craig shines as the enigmatic Detective, Benoit Blanc. Blanc and his shrewd observations find himself at the heart of the case as his eccentric pursual of justice lead to brilliant moments of chaos, proving that there is a method to his madness. Knives Out could have easily overexaggerated Blanc’s character quirks that would have worked against the narrative in the long run. Instead, Craig chose to subtly emphasise Blancs eccentricities using them to enhance the narrative rather than overshadowing it. This role was made for him and it’s clear he relished in the theatrics of Benoit Blanc.

The last thing you’d ever expect from this quirky murder mystery is the subtle social commentary that’s woven between the lines of this case. This bizarrely eccentric tale quickly utilises its position to tie into America’s social and political tension. The Thrombey family’s treatment of Ana De Armas’ Marta reflects their skewed worldviews as their self-imposed image as worldly saviours allow them to manipulate their position of power to vilifying the only genuinely noble character in this entire film. Marta quickly becomes the hero of the story as she is subjected to the Thrombey’s condemnations, yet never stoops to their level of pettiness, choosing to show empathy and kindness to those that don’t deserve it.

Viewers are privy to a version of the truth early in the film and what follows is an elaborate cover-up that’s trapped in a tangled web of secrecy and lies. Everyone has a motive and the more we learn about Harlan’s final night, the more sinister characters become as their greedy ambitions seek to consolidate their position in the family, manipulating events for their own benefit. Conspiracy theories run wild and Rian Johnson cleverly drops revealing clues throughout the film that eventually lead us to the truth. How we get there is a series of fast-paced and highly entertaining search for clues that keep viewers guessing until the very end. It’s a film that clearly embraces every classic murder mystery trope but does so with a stylistically modern flair to it, making it a joy to watch.

Knives Out would not be the blockbuster it is without the brilliant cast that heightens the drama of our characters menacing deeds. With seasoned actors working alongside rising stars of the industry, viewers are treated to stellar performances from a cast that relishes in the over the top actions of these absurd characters. The bloated egos of the Thrombey family are a lingering source of tension that heightens the sense of urgency as their desperate attempts to secure their legacy lead to sharp accusations. Ana de Armas shines in her role as the late Harlan Thrombey’s nurse, Marta and is the perfect foil to the power-hungry Thombreys, using her kindness to combat their greed, proving that soft hearts are not so easily swayed by the lure of money and power.

What’s your all-time favourite murder mystery film?
What do you want to see in the Knives Out sequel?