Supernatural first came to our screens in 2005 and over the years the show has gained a massive and loyal following. Sadly, all things must come to an end and after 15 years, fans are now tuning in to the Winchester’s final battle. Sam and Dean have seen it all, but they’ve never been alone on their adventures. Without the help of these hunters, angels, and various other creatures, the outcome of so many events would be drastically different. Here is my ranking of some of the Winchester’s greatest allies.

Perhaps one of the most underused allies the Winchester’s have, Garth and all of his eccentricities has proven to be one of their most valuable assets. Before his werewolf transformation, Garth stepped up and was the source on crucial information for hunters, a role that had previously been occupied by Bobby. He’s the most unconventional hunter making his dynamic with the Winchester’s hilarious.

This trickster has a habit of running away from responsibility, but even after removing himself from the conflict, Gabriel left Winchester with some much-needed insight and information. His last outing with the brothers ended in tragedy, but he did so having aligned himself with the boys to take on his archangel brothers.

Much like her son, this witch blurs the lines between good and evil. Rowena often aids the Winchesters when it benefits her own cause. She is a powerhouse, and by aligning herself with the Winchesters, their advantage significantly increased. She’s powerful, badass, and has some truly brilliant banter with the boys.

Back in the day, the Apocalypse was the single biggest threat of this world. During that time. the two strongest allies they had was the mother/daughter duo, Jo and Ellen. Sadly, they meet their tragic end in one of Supernatural’s best episodes ‘Abandon all Hope,’ where Jo and Ellen bravely stays behind as they go out in a blaze of glory.

Jody is one of the few allies that’s still standing. Like most hunters, Jody’s introduction to the hunting world came out of tragedy, having lost her family on the Winchesters current hunt. Jody has since become a mother figure to not just Sam and Dean, but to Claire and Alex, two young girls that find themselves on their own following their own dealings with the hunting world.

The one death that shocked the fans, Charlie was the best little sister the boys could ask for. From her LARPing strategies, brilliant computer skills, search for knowledge, and moving heartbreaking tale, Charlie is one character every fan could relate to. Her willingness to help the Winchesters often put her in harms way, and sadly it was her loyalty to the brothers that ultimately got her killed. 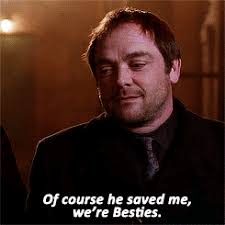 The best frenemy the boys could ask for. The apple doesn’t fall far from the tree as Crowley is more of a businessman than ally. He sides with whoever can further his own interest. YHe won’t hesitate to betray the brothers, but the king of hell has a soft spot for “squirrel” and “moose.” Whether it’s karaoke with demon Dean or putting an end to the apocalypse, Crowley has had some good times with the boys, and it’s worth noting that his final stand was in defending his frenemies.

Kevin really got the short end of the stick here. He came to the Winchester’s attention when he was chosen as the next prophet of the lord. Since then he’s been on the run, with plenty of enemies from all sides out to exploit his abilities. There’s no doubt that the boys, especially Dean, cared deeply for Kevin, but more often that not he paid the price for the Winchesters actions.

A most welcome addition to the Winchester family, Jack has been a source of conflict for the boys. Being the spawn of Lucifer himself, Sam and Dean were at odds on how to raise this Nephilim. Jack is definitely a powerful ally, but also comes to look at Dean, Sam, and Castiel as his father figures. It almost feels like he’s the missing link in this family and while his actions often draw the boys into further conflict, the bond they’ve built with Jack was strong enough to defy God himself.

The most lovable angle in the universe. Castiel is undoubtedly one of the Winchester’s strongest and most loyal allies. Sure, his noble intentions have put him at odds with the brothers a couple of times, but he’s always found his way back to the Winchesters side. He’s such a permanent fixture in their lives that it’s hard to imagine them existing without him. Castiel is often the voice of reason, source of conflict, and a formidable warrior, but if there is one thing you can be sure of, it’s his love for the Winchester brothers.

By far the greatest ally, Bobby was more like a father to them than John ever was. Plenty of people will call them out on their bull, but Bobby is the one that could talk sense to them. He was their first point of contact when they needed information or bailing out of a tough situation. He even fought off a demonic possession long enough to incapacitate himself so that he didn’t harm the boys. Bobby’s passing was also one of the most moving episodes in Supernatural history, and even after his death, his memory and guidance still have an influence of the Winchester boys.

How would you rank the Winchester’s allies?