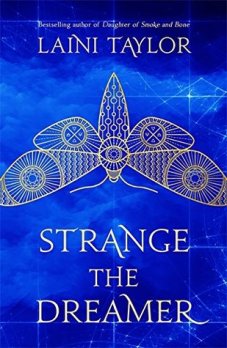 e the Dreamer (Strange the Dreamer, #1) by Laini Taylor
Publication Date: March 28th, 2017 by Hodder & Stoughton
Rating: 4.5 Stars
Genre: Fantasy, Young Adult/Adult
Find: Goodreads | Amazon
Goodreads Summary
The dream chooses the dreamer, not the other way around – and Lazlo Strange, war orphan and junior librarian, has always feared that his dream chose poorly. Since he was five years old he’s been obsessed with the mythic lost city of Weep, but it would take someone bolder than he to cross half the world in search of it. Then a stunning opportunity presents itself, in the person of a hero called the Godslayer and a band of legendary warriors, and he has to seize his chance to lose his dream forever.

What happened in Weep two hundred years ago to cut it off from the rest of the world? What exactly did the Godslayer slay that went by the name of god? And what is the mysterious problem he now seeks help in solving?

The answers await in Weep, but so do more mysteries – including the blue-skinned goddess who appears in Lazlo’s dreams. How did he dream her before he knew she existed? And if all the gods are dead, why does she seem so real?

In this sweeping and breathtaking new novel by National Book Award finalist Laini Taylor, author of the New York Times bestselling Daughter of Smoke & Bone trilogy, the shadow of the past is as real as the ghosts who haunt the citadel of murdered gods. Fall into a mythical world of dread and wonder, moths and nightmares, love and carnage.

Strange the Dreamer is the kind of book that transports you to other worlds, with images so vivid it feels like you’ve stepped into a dream. Laini Taylor’s greatest strength has always been in her writing as it immediately transports readers to this land of magic and wonder, of destruction and despair, of dreams and hope. This is a story that explores the desperation of a people shadowed by their history and the lengths they turn to free themselves from that memory.

At the centre of this book is the mysterious city of Weep, a place of magic and wonder to those curious enough to seek it, but a place of nightmares for those who live there. The journey to Weep heightens the mystery of the city and builds a sense of anticipations in readers to unravel its mysteries. Laini Taylor turned the city of Weep to a character in itself. The imposing designs and the intricate details provided a vital role in understanding the history of this world and explore the ways it shaped the lives of our characters.

Our understanding of this world comes to us through the journey of Lazlo Strange, orphan, librarian, and dreamer. To those around him, Lazlo is but a hindrance, a nobody, someone whose fantastical ramblings have no place in the world of science and logic. Someone whose own study of tales and magic make him a valuable asset to the problem in Weep, even if he doesn’t see it himself. His journey was a breathtaking exploration of identity and understanding and with that, offers a different perspective on the tragedy that has loomed over Weep. His compassion became his greatest strength, and it was his compassion that ignited a sense of hope in building a bridge between the occupants of Weep.

Lazlo Strange is not the only dreamer in this world, and while we see the desperation of humanity through his eyes, we are also treated to the experiences of other victims caught in the middle of the bloody history of Weep. It is Sarai who introduces us to the destruction humanity reaped onto the innocent godspawn, whose only crime was being born into this cruel, destructive world. Few survived the trauma, and the secrecy of their existence is crucial to their survival. Through Sarai, we come to understand how the actions of gods and humans alike shaped their being, with some so hardened by the brutality of their history that the only solution is with vengeance. However, Sarai’s gift connects her to humanity, and with Lazlo’s assistance could build a bridge between humans and gods and bring an end to the bloodshed and violence that plagued the city.

Some readers might take issue with the pacing of the book. Yes, the pacing is slow, but it’s in those moments that we witness the quieter moments that ground out characters. It allows us to explore the dynamic between the bystanders and the leaders, of the banter between Lazlo and his companions, and how all our characters are connected by Weep in one way or another.

Strange the Dreamer is an evocative tale of dreams and hope. Laini Taylor has created a world so vivid in its imagination you can’t help but be drawn into it. However, even as this story sweeps you off its feet with its fairy tale qualities, it also provides a stark insight into themes that ground our characters in their humanity and vulnerability.

Have you read Strange the Dreamer?
Whowas your favourite character in the novel?

17 thoughts on “Review: Strange the Dreamer by Laini Taylor”