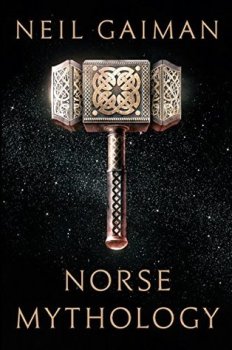 Norse Mythology by Neil Gaiman
Publication Date: February 7th, 2017 by Bloomsbury Publishing
Rating: 4 Stars
Genre: Fantasy, Mythology, Short Stories
Find: Goodreads | Amazon
Goodreads Summary
The great Norse myths are woven into the fabric of our storytelling â€“ from Tolkien, Alan Garner and Rosemary Sutcliff to Game of Thrones and Marvel Comics. They are also an inspiration for Neil Gaiman’s own award-bedecked, bestselling fiction. Now he reaches back through time to the original source stories in a thrilling and vivid rendition of the great Norse tales. Gaiman’s gods are thoroughly alive on the page â€“ irascible, visceral, playful, passionate â€“ and the tales carry us from the beginning of everything to Ragnarok and the twilight of the gods. Galvanised by Gaiman’s prose, Thor, Loki, Odin, and Freya are irresistible forces for modern readers and the crackling, brilliant writing demands to be read aloud around an open fire on a freezing, starlit night.

Nail Gaiman’s collection on Norse mythology provides a modern and fresh feel to the tales while staying true to the elements that make them such a memorable staple in time. It is easy to immerse yourself in the tales. They’re exciting and complex, but also funny and charming, which perfectly captures the qualities that make Gaiman such a force in fantasy writing. From Loki’s mischievous charm to Thor’s arrogance and Odin’s wisdom, Gaiman perfectly captures the characteristics that make the gods so memorable. Here, he has taken character’s that are so well known in pop culture and provides a complex insight into the nature of these gods, capturing the elements that make them such legendary beings, whilst also grounding them in their humanity.

Perhaps the most striking element in this collection of tales is seeing the influence they’ve had in other media. It’s no secret that the Vikings are a popular topic for many TV shows and films. From How to Train Your Dragon, to The Last Kingdom, Vikings, and Thor himself, there is no shortage of Viking based productions. It is easy to see the appeal in these tales. When looking at history, the Norsemen had a prolific effect on Britain and Europe, and the brutish, mysterious, and magical stereotype the Norsemen are associated with is great entertainment. In these tales, you can easily draw parallels to many iconic moments across TV and film. For example, Floki’s punishment in the Vikings is a strong symbolic parallel to Loki’s own punishment.

Gaiman’s take on Norse Mythology is nothing short of a success. The tales are entertaining, but also highlight why mythology has stood the test of time as the social and cultural representations in these myths can easily be applied to our own society.

Who is your favorite Norse god?
Have you read a Neil Gaiman book?