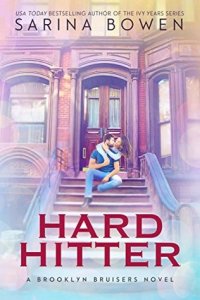 As team captain and enforcer, Patrick O’Doul puts the bruise in the Brooklyn Bruisers. But after years of fighting, O’Doul is feeling the burn, both physically and mentally. He hides his pain from the coaching staff, but when his chronic muscle strain becomes too obvious to ignore, he’s sent for treatment with the team’s massage therapist.

After breaking up with her long-term boyfriend, Ari Bettini needs a timeout from men. She’s focusing only on work: rehabilitating the Bruisers’ MVP. O’Doul is easy on the eyes but his reaction to her touch is ice cold. Ari is determined to help O’Doul heal, but as the tension between them starts to simmer, they both learn that a little TLC does the body good…

Sarina Bowen takes us back to the fast-paced world of the Brooklyn Bruisers. The concept of this series will always be an interest of mine as we explore the lives of the people that keep a well-established organisation running.

In Hard-Hitter we shine a spotlight on the Brooklyn Bruisers yoga instructor and masseuse, Ari. After ending her tumultuous 8-year relationship, Ari is ready to embrace the single life. However, her life seems to be anything but simple as her ex’s business dealings see her caught in the crossfire. When things seem to settle, another issue crops up to shatter that peace. It’s a stressful time for Ari, and to make matters even more complicated, Patrick O’Doul has taken it upon himself to keep Ari out of harm’s way. Naturally, as they spend more time together, sparks fly. Ari is an easy person to root for. She has a lot of stress in her life and her feelings for the Bruiser’s captain definitely doesn’t make things easier. She’s a strong woman looking to rediscover herself after spending so much of her adult life being tied to someone else. It’s a messy and complicated web of emotions, but as much as Ari struggles to find herself, the journey she takes prove to be rewarding in the long run.

In Rookie Move, Patrick O’Doul came across as a stoic individual. It was hard to get a judge of his character. He may be the team’s captain, but off the ice, he is closed off and hasn’t formed much of a connection to his teammates. Throughout this book, we get to see why that is. O’Doul was not given an easy hand in life, and he’s worked hard to get to where he is today. Still, the walls he’s built around himself can be lonely and isolating, even if he doesn’t see it himself. The further we get into the story the more we see him open up to Ari and his teammates and take the time to build a relationship with the people that genuinely care about him.

What’s impressive about Sarina’s storytelling is the way she crafts an individual identity for each of her characters. The progression of their characters as individuals is just as important as the romantic development. In Hard-Hitter, we shine a spotlight on the role of the enforcer and the fighting culture that’s ingrained in Ice Hockey. The enforcer is the guy that’s usually right in the middle of the fight. However, recently we’ve seen the frequency and intensity of these fights diminished. Why? For the sake of the player’s health. These fights might be a great way to energize the crowd and the team, but the toll it takes on a players body is immense. Through Patrick, we get to see the mental and physical toll the role of enforcer has had on him and in that, we see how players can end up following a dark and dangerous path. With a Sarina Bowen book, you can guarantee a stunning romance. However, what made this book so wonderful was the way she explores the darker side of ice hockey as a profession. It’s a demanding job and the way she realistically explores these issues is brilliant.

Fans of the series will definitely enjoy this installment of the Brooklyn Bruisers. The story takes a much darker turn and explores some heavy issues, but we’re still treated to some tender moments, and while the romance between Ari and O’Doul isn’t my favourite, it’s still an enjoyable ride.

Which book in the series is your favourite?