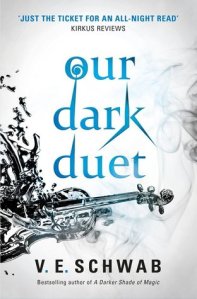 Our Dark Duet (Monsters of Verity #2) by Victoria Schwab
Publication Date: June 13th 2017 by Titan Books
Rating: 4 Stars
Genre: Young Adult, Fantasy
Find: Goodreads | Amazon
Goodreads Summary
Kate Harker is a girl who isn’t afraid of the dark. She’s a girl who hunts monsters. And she’s good at it. August Flynn is a monster who can never be human, no matter how much he once yearned for it. He’s a monster with a part to play. And he will play it, no matter the cost.

Nearly six months after Kate and August were first thrown together, the war between the monsters and the humans is terrifying reality. In Verity, August has become the leader he never wished to be, and in Prosperity, Kate has become the ruthless hunter she knew she could be. When a new monster emerges from the shadows—one who feeds on chaos and brings out its victim’s inner demons—it lures Kate home, where she finds more than she bargained for. She’ll face a monster she thought she killed, a boy she thought she knew, and a demon all her own.

Victoria Schwab has done it again. Our Dark Duet is the conclusion to the Monsters of Verity duology and, as we come to expect, the book was a tense and suspenseful experience and provided plenty of character insights and moral complexities.

Our Dark Duet picks up six months after the events of This Savage Song. August has taken up leadership and is grappling with his identity. Having embraced his role in the new world, August struggles between fully embracing his monster self and his compassion. He will never be human but he’s seen and experience enough of humanity to realise the world is not painted in black and white. Choosing to acknowledge those shades of grey over his duty becomes the heart of his internal conflict.

Kate, on the other hand has taken to fighting the monsters that plague the city of Prosperity. However, this guise and determination to kill these monsters only serves as a distraction from her loneliness. She’s sure to keep her distance from the ragtag bunch of misfits that help track the monsters but it’s a losing battle. An encounter with a new monster, one that reeks of havoc and death, sends her back to Verity to warn them of this new threat. Her journey sends her right back to August which brings the demons they both face to the forefront.

Identity has always been at the heart of this series and watching August and Kate grapple with their demons was the highlight of this book. August is not the same as he was in the first book. His role as leader has hardened him, he’s shut off that part of him that related to humanity. Kate, on the other hand, finds herself embracing her humanity only to find herself compromised after an encounter with this new monster. With that she struggles to hold on to her humanity as the monster within her fights for control.

This book took its time to take off but once you got back into the action and familiarised yourself with this world it was all uphill from there. The city of Verity remains to be on the brink of war and with this new threat the stakes are even higher. August and Kate are thrown into the middle of the chaos. They are not alone on their journey and we are introduced to a few new characters. The Soro, a gender neutral Sunai being one of them. The Soro highlights the differences between them and August. Soro is content with their role in this world. They punish those who have sinned without question, whereas August struggles with the morality of the act. The Soro were fascinating as a character but they could have benefited from a bit more page time to give us a greater insight into their mind.

Overall, Our Dark Duet was a solid conclusion to the Monsters of Verity duology. After familiarising yourself with the world this book hits the ground running. It was intense, unpredictable and crushing at times. In a world of monsters and chaos it’s foolish to think that the end will be neatly wrapped up in a bow, but it provided a glimmer of hope for this world making it all the more real.

10 thoughts on “Review: Our Dark Duet by Victoria Schwab”