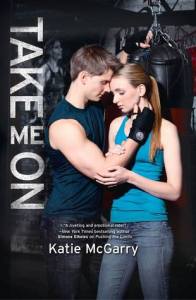 Take Me On (Pushing the Limits #4) by Katie McGarry
Publication Date: May 27th 2014 by Harlequin TEEN
Rating: 3.5 Stars
Genre: Young Adult, Contemporary, Romance.
Find: Goodreads | Amazon
Goodreads Summary
Champion kickboxer Haley swore she’d never set foot in the ring again after one tragic night. But then the guy she can’t stop thinking about accepts a mixed martial arts fight in her honor. Suddenly, Haley has to train West Young. All attitude, West is everything Haley promised herself she’d stay away from. Yet he won’t last five seconds in the ring without her help.

West is keeping a big secret from Haley. About who he really is. But helping her-fighting for her-is a shot at redemption. Especially since it’s his fault his family is falling apart. He can’t change the past, but maybe he can change Haley’s future.

Hayley and West have agreed to keep their relationship strictly in the ring. But as an unexpected bond forms between them and attraction mocks their best intentions, they’ll face their darkest fears and discover love is worth fighting for.

The fourth installment to the addictive Pushing the Limits series. Take Me On follows West. He made his first appearance in the third book, Crash Into You, and he unwittingly contributed to the events that led to his sister, Rachel’s hospitalisation. It’s safe to say he had a lot to prove.

The events of this book take place before Crash Into You’s epilogue. Rachel is still in the hospital recovering from her injuries and West is hit by the guilt over his indirect role in the accident. He still has that overprotective bravado about him and disapproves of Isaiah’s role in Rachel’s life. West is a bit of a ticking time bomb. He’s been known to get into a few scuffles, mostly in defense of his sister, but fighting also gives him a release from all of the thoughts and fears that haunt him. In this book West is forced to confront these fears and in doing so discover his own identity that isn’t confined to the expectations of his parents.

We also meet Hayley in this book and she faces challenges of her own. Her family seems to be crumbling following the loss of their home and descent into poverty. On top of that, Hayley’s choice to abandon kick-boxing after a scary incident with her now ex boyfriend has meant distancing herself from her brother and cousin, her once closest allies. She doesn’t have it easy and it wasn’t hard to sympathise with her situation. Her strength, physically and mentally, is admirable and when West comes crashing into her life, Hayley is forced to face the demons of her past in order to create the future she wants.

Like with all of Katie McGarry’s couples, the chemistry between West and Hayley was palpable. They tried denying the attraction between them but it was a losing battle from the start. Yes, they have a lot of obstacles to overcome but both understood that some battles had to be fought alone. Instead of relying on each other to sort out these issues, they leaned on each other and supported the other when things got tough. From West’s standpoint, his relationship with Hayley and her family’s judgement of him, led to his acceptance of Isaiah and through that he got to see that his overprotective nature over Rachel was driven by his need to feel useful. Being her protector gave him a purpose but in this book he comes to see Rachel’s own strength and realise that she may not need a protector but she does need her brother.

Fans of Katie McGarry will definitely enjoy this book. The chemistry between Hayley and West sizzles. Both face a lot of challenges and are forced to confront their own demons in order to embrace their relationship and themselves.

8 thoughts on “Review: Take Me On by Katie McGarry”