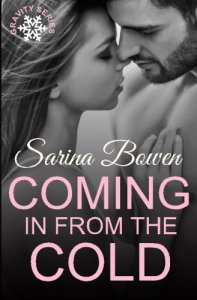 Coming in From the Cold (Gravity #1) by Sarina Bowen
Publication Date: May 1st 2014 by Harlequin
Rating: 3 Stars
Genre: New Adult, Contemporary, Romance, Sports – Ski Racing
Find: Goodreads | Amazon
Goodreads Summary
He can’t have her. And he can’t tell anyone why.

Ski racer Dane “Danger” Hollister does not do relationships, though he keeps his reason a secret. The real-life curse he’s inherited from his mother will eventually cost him everything: his place on the Olympic ski team, his endorsement income, and his ability to fly downhill at top speed.

Reluctant country girl Willow Reade meets Dane by accident. Literally. Her skidding truck forces him off the road during a blizzard. Stranded together in his Jeep as night falls, the two loneliest people in Vermont find themselves sharing more than they’d planned. And not just conversation.

Yet neither can guess how their unlikely tryst will threaten Dane’s frightening secret and Willow’s tentative peace with her own choices. Only mutual trust and understanding can end their pain and give them a hard won shot at love.

Sarina Bowen’s True North series was one of last years reading highlights. So there was a lot of expectations with this book. Coming in From the Cold was an equally addictive, if not short read but unfortunately lacked the heart and emotional connection that made the True North series such a hit.

Part of the problem with this book was the characters. Dane doesn’t do long term relationships. Believing to carry a genetic disease that will ultimately end in his death, Dean has distanced himself from forging any long term relationships. So when he and Willow end up stranded in the middle of a snow storm, the last thing he expected was to form a connection with this woman. Believing that his fate has been permanently sealed, Dean does his best to resist Willow but it’s tougher than it looks especially when an unexpected obstacle makes its presence known. It’s easy to sympathise with Dean’s situation and his loneliness is felt throughout the book but that doesn’t excuse the way he treats Willow. He is cold and down right cruel in some of the words he says. Pushing someone away is one thing but talking her down and making rash accusations was not necessary. Dean does eventually make amends for his words and once the elephant in the room is finally addressed, he becomes a lot more likeable.

Connecting with Willow wasn’t all that easy either. Again, she’s an easy character to sympathise with but it was hard to form that connection with her. Trust does not come easy for her as her ex left her stuck in Vermont, putting her own aspirations on hold so that she can sustain her livelihood. Again loneliness seems to draw Willow and Dean to one another and you can feel that connection between them. Sarina Bowen does a fantastic job at building up the tension between them and when Dean and Willow finally get on the same page their relationship sizzles but the book could have benefited from more page time. Coming in from the Cold is a relatively short book and because of that we are constrained and don’t get enough time to build these characters and relationships as well as I’d have liked.

Overall this book makes for a good pick for anyone looking for an easy breeze book to fly through. Unfortunately the characters left no impression but the romantic tension between them is felt.

5 thoughts on “Review: Coming in From the Cold by Sarina Bowen”