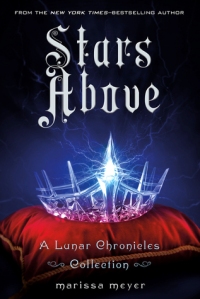 The universe of the Lunar Chronicles holds stories—and secrets—that are wondrous, vicious, and romantic. How did Cinder first arrive in New Beijing? How did the brooding soldier Wolf transform from young man to killer? When did Princess Winter and the palace guard Jacin realize their destinies?

With nine stories—five of which have never before been published—and an exclusive never-before-seen excerpt from Marissa Meyer’s upcoming novel, Heartless, about the Queen of Hearts from Alice in Wonderland, Stars Above is essential for fans of the bestselling and beloved Lunar Chronicles.

Most of the information divulged in these stories is already alluded to in the main series but to get an insight into the mindset of some key characters, such as Michelle Benoit, heightens the emotion of their circumstances and the harsh reality of the challenges they faced. Personally, the most brutal story is of Wolf’s transformation into an Alpha in Levana’s army and how his position affected his relationship with his younger brother, who was determined to step outside of his shadow. It’s a heartbreak story but made the events in the epilogue that much sweeter.

We also get to catch a glimpse of our other main characters. The Princess and the Guard gives us an insight into the friendship between Winter and Jacin and how they navigated life under Levana’s scrutiny and jealousy. We’re also treated to Cinder’s early life under the care of Linh Garan and his family. This story didn’t add much to what we already knew, but to read about Cinder’s isolation and loneliness in this family was heartbreaking. Thorne also gets his own tale of mischief and while the story was so typically in character for him, it did leave a bit of a sour taste in my mouth at how he treated some people, no matter how understandable his actions are. Kai doesn’t get his own childhood story, but we are treated to an insight into him mind of the moment he first meets Cinder.

However, the story that really took the crown was Something Old, Something New. The epilogue to Winter allowed us to check back in with the characters following the revolution. Here we get to see how the world is faring following Levana’s fall and what the characters are up to. The setting of this epilogue was perfect and did a phenomenal job at closing this chapter of the tale.

For fans of The Lunar Chronicles, Stars Above is a wonderful book. While a lot of the information we get from the backstories isn’t new, the insight into their circumstances before the events of Lunar Chronicles heightens that emotional connection established between the reader and the characters. The epilogue was a perfect conclusion to this series and while I’d love to check in with these characters again in the future, Stars Above was enough to sate that need…for now at least.

8 thoughts on “Review: Stars Above by Marissa Meyer”