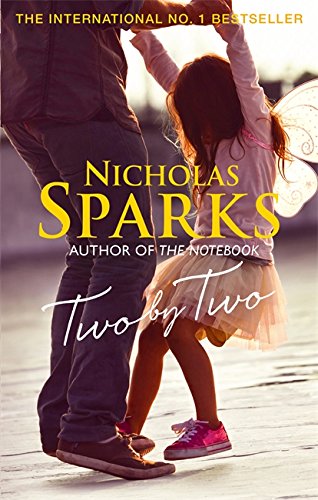 Two by Two by Nicholas Sparks
Publication Date: October 4th 2016 by Grand Central Publishing
Rating: 4 Stars
Genre: Adult, Contemporary, Romance
Find: Goodreads  | Amazon
Goodreads Summary
At 32, Russell Green has it all: a stunning wife, a lovable six year-old daughter, a successful career as an advertising executive and an expansive home in Charlotte. He is living the dream, and his marriage to the bewitching Vivian is the center of that. But underneath the shiny surface of this perfect existence, fault lines are beginning to appear…and no one is more surprised than Russ when he finds every aspect of the life he took for granted turned upside down. In a matter of months, Russ finds himself without a job or wife, caring for his young daughter while struggling to adapt to a new and baffling reality. Throwing himself into the wilderness of single parenting, Russ embarks on a journey at once terrifying and rewarding—one that will test his abilities and his emotional resources beyond anything he ever imagined.

“Two by two, and we’ll make it through”

Being a writer myself I know that you constantly need to adapt and push yourself with your writing. If you stick with the same old plots, same dramatic events, and timeline not only will you get bored but so will your readers. That’s one thing I love about Nicholas Sparks new book. This book is very different from his past books. For anyone who has read his others or for anyone who has never picked up any of his books, either type of person need to keep an open mind before picking this one up because it is different.

As usual Nicholas Sparks book is boy meets girl meets boy they talk, hang out and then fall in love but that is not the storyline of this book. This book talks about Russ and Vivian love and their marriage that falls apart. He talks about the hardships the couple goes through especially with having a 6 year old daughter named London. But it’s not about them just getting a divorce it’s what leads up to the divorce such as Russ leaving his job and starting a new one, Vivian getting a job, London’s countless activities, the fights and so much more. He really talks it down about how a couple can sometimes just drift and if both don’t put in the effort anymore then the marriage can be over.

I mentioned earlier that I’m a writer myself and knowing very well that you have to push boundaries when it comes to your writing, writing things that you may never have written before and for that I applaud Nicholas for doing that with this book. But there were some concerns I had because he was writing something he hadn’t before and he went straight for the clichés which kind bothered me. But I don’t blame him either because if I was writing this story I might have done the same. But at the same time knowing the potential that Nicholas has it did seem like he took the easy way out with the book making it very easy to know exactly where the book was going.

That being said this was an enjoyable book slow at some points but as soon as it picked up there were times I couldn’t put it down. Would it be one of his books I’d re read again; absolutely. But it might be some time since it’s quite fresh in my head. Overall I loved the story and the characters there was no shortage of wonderful writing in this book.