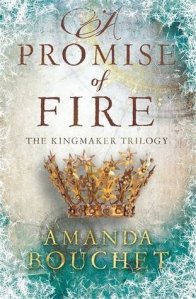 A Promise of Fire (The Kingmaker Chronicles #1) by Amanda Bouchet
Publication Date: August 2nd 2016
Rating: 3.5 Stars
Genre: Adult, Fantasy, Romance
Find: Goodreads  | Amazon
Goodreads Summary
Catalia “Cat” Fisa is a powerful clairvoyant known as the Kingmaker. This smart-mouthed soothsayer has no interest in her powers and would much rather fly under the radar, far from the clutches of her homicidal mother. But when an ambitious warlord captures her, she may not have a choice…

Griffin is intent on bringing peace to his newly conquered realm in the magic-deprived south. When he discovers Cat is the Kingmaker, he abducts her. But Cat will do everything in her power to avoid her dangerous destiny and battle her captor at every turn. Although up for the battle, Griffin would prefer for Cat to help his people willingly, and he’s ready to do whatever it takes to coax her…even if that means falling in love with her.

This book was a thrilling ride full of tension and magic. It’s an easy book to get addicted to. As the first in a series we are immediately thrown into this magical world and while we’re not privy to all the details in these magical and political landscapes, we do get a sense of what awaits us in the next instalment. The use of Greek mythology was also a prominent feature in this book and it did a great job at utilizing the gods without taking away from the books individuality.

The story is told in the point of view of our main character Cat. She’s stubborn and guarded but also has a good sense of humour and shows sparks of vulnerability throughout the course of the book. We learn a lot about Cat’s upbringing which helps explain why she’s so guarded. Her harsh upbringing has understandably helped shaped her and while some of her decisions were very impulsive and reckless, we can understand why she made those choices. She definitely made an impact on this book and I’m interested in seeing where her journey takes her next.

We also meet Griffin in this book and this is where the conflict emerges. He is the man responsible for upending Cat from the safe haven she’d carved out for herself. Understandably there’s a lot of resentment and anger on her part but he is convinced that his actions are for the greater good and that Cat will ultimately understand and accept her new circumstances. Initially, it was tough to root for the guy. Not once does he apologise for taking Cat away from her home and family because he believed that he was giving her a better life. He’s equally as stubborn as Cat and is the definition of an Alpha Male. Lucky for him, he does have some redeeming qualities. Accompanying him and Cat on this journey are his team and these guys brought some light-hearted banter to the group and Griffin’s interaction with them showed another side to him. On top of this, he is also compassionate and incredibly loyal and when he broke down his walls for Cat we saw this tenderness to him that made him a lot more likeable. His loyalty to his family was also an admirable quality but it also contributed to that frustration at how he ignores how Cat feels about being taken away from hers. It’s like no one thinks about the people Cat is forced to leave behind because of them. While she does end up embracing Griffin and the others that doesn’t mean she doesn’t miss the circus members that welcomed her as part of their family.

There is also a romantic development between Cat and Griffin and as you can imagine there is a lot of tension between these two hot-heads. Understandably Cat is hesitant about opening up to Griffin but everyone can see the way they gravitate towards each other and it was just a matter of time before those fireworks exploded. The romance between them was enjoyable and I especially appreciated the slow burn nature to it.

A Promise of Fire is a solid introduction to the series. The world building is vivid and captivating and while it took some time to warm up to Griffin, the dynamic between him, Cat and his team was enjoyable and I can’t wait to read the next instalment in the series.

2 thoughts on “Review: A Promise of Fire by Amanda Bouchet”