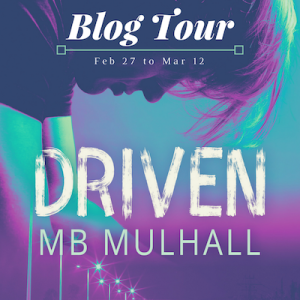 I am thrilled to be taking part in the blog tour for MB Mulhall’s New Adult novel Driven. The story follows eighteen year old Oliver’s struggles to reintegrate into his community following a stint in prison. MB Mulhall was kind enough to take the time to answer some questions about Driven.

Where did you find inspiration for Driven?

For me, guilt is a powerful motivator and I find it hard to comprehend how some people can just brush it off and go on with life like they’ve done nothing wrong. I’m not talking guilt over stealing a cookie before dinner but the big stuff.  With the current political climate here in the states along with the resurgence of blatant and rampant racism, it really got me wondering how some of these people could sleep at night and live with their actions. Why couldn’t they see how harmful their words and displays were? Why wasn’t guilt keeping them up at night? Maybe it was and I just didn’t know? Oliver’s story came to me I wanted to make his guilt an almost palpable entity, as if it were a character itself, and how he works to make amends, like I wish more people would do in the real world.

What was the biggest challenge you faced when writing the book?

It’s always time for me. Finding time to sit and write. Not being distracted by the puppy demanding pets or the dirty laundry demanding washing or the shiny shiny Internet. I’m definitely a procrastinator and need real deadlines to motivate myself. When you self pub or small press pub without an agent, there’s no one breathing down your back to get things done. It’s definitely my biggest issue.

If you could pick one song to describe Oliver and Simon’s journey, what would it be?

Oh geez. This is hard! I love music but I am definitely not one of those people who make playlists to go along with my books. I tend to listen to instrumental stuff to just set the mood. Can I pick an album? I listened to a lot of Rodrigo y Gabriela‘s 11:11. There’s Hanuman which I think would represent their growing interest in each other. It’s fast paced and upbeat but a bit…dark at the same time which to me would represent their secrets. Logos is slower and sad and perhaps when they are fighting with each other or when Oliver leaves and Simon searches for him.

Describe you book using no more than 5 words.

What message would you like your readers to take from Driven?

That they are worth while. That people can make mistakes but you can overcome them, they don’t need to define you. Redemption is possible (and that doesn’t have to be taken in a religious context.). Love yourself. 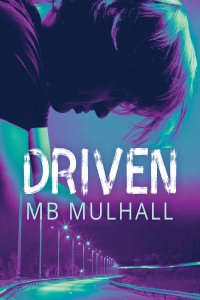 Eighteen-year-old Oliver’s troubles don’t end when he’s released from prison. He has nowhere to go, and he can’t even think about moving past his crimes while trying to survive homelessness.

Helping an elderly woman after a fall guides Oliver into at least a temporary home. In exchange for odd jobs and some assistance, he’s welcomed into a life with the old twin spinsters, and it seems too good to be true. The neighbor, Simon, certainly thinks it is. He doesn’t trust Oliver or his motives. Oliver is used to that kind of judgment, but it isn’t helping him overcome his guilt. Maybe Simon is right and Oliver doesn’t deserve happiness—or any of the other feelings stirring in a heart Oliver thought he’d closed off for good.

MB Mulhall is a published author who typically has way too much on her plate. In between making vlogs and writing books, she tests her patience and pays the bills by helping to manage a home for developmentally disabled adults. She has a BA in Comparative Literature and Languages from Hofstra University as well as an Elementary Ed degree from Georgian Court University.

March 12 — Review on From Top to Bottom Reviews
https://fromtoptobottomreviews.com/