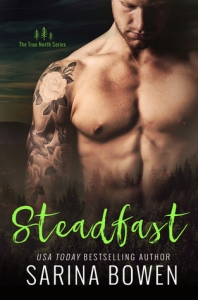 Steadfast (True North #2) by Sarina Bowen
Publication Date: July 12th 2016
Rating: 4 Stars
Genre: New Adult, Contemporary, Romance
Find: Goodreads | Amazon
Goodreads Summary
She’s the only one who ever loved him—and the only one he can never have.

Jude lost everything one spring day when he crashed his car into an apple tree on the side of the road. A man is dead, and there’s no way he can ever right that wrong. He’d steer clear of Colebury, Vermont forever if he could. But an ex-con in recovery for his drug addiction can’t find a job just anywhere.

For Sophie Haines, coming face to face with the man who broke her heart is gut-wrenching. Suddenly, he’s everywhere she turns. It’s hard not to stare at how much he’s changed. The bad boy who used to love her didn’t have big biceps and sun-kissed hair. And he’d never turn up volunteer in the church kitchen.

She knows it’s foolish to yearn for the man who returned all the heartsick letters she wrote him in prison. But the looks he sends her now speak volumes.

No one wants to see Sophie and Jude back together, least of all Sophie’s police chief father. But it’s a small town. And forbidden love is a law unto itself.

This is the second installment to the True North series and while it differs in several aspects, the one thing you can say about this series is that it carries a lot of heart. Steadfast is significantly darker than Bittersweet, which is understandable as the book focuses on Jude, a recovering drug addict who is slowly immersing himself back into society. In Bittersweet, Jude was the quite but hard working farm hand at the Shipley’s. In Steadfast, we get an insight into his mentality as his stint at Shipley’s farm comes to an end and he is forced to head back to his home town where temptation lurks around every corner as he faces the demons that haunt him. It’s a tough story to follow as Jude struggles with his addiction. Further heightening this struggle was the effective “craving meter” added at the beginning of his chapters, reminding us that addiction is a constant battle, one that cannot miraculously disappear within the blink of an eye. His journey is emotional and Jude’s voice was guilt ridden and vulnerable. He acknowledges the damage he’s caused, has faced the consequences of those choices and has worked so incredibly hard to face his addiction and become a better man. It’s a tough journey, especially when people expect him to fail, but his strength and determination to not let his addiction take hold is admirable. His journey was a beautiful battle and you can’t help but be proud of Jude.

Many people in Colebury would like nothing more than to see Jude fail and you would expect to find Sophie on that list. As the sister of the guy killed in the drug-infused car-crash that put Jude behind bars, you’d think that she’d harbour a lot of anger and resentment towards Jude. However, this wasn’t the case. She was sweet and caring and did not harbour any hatred for Jude. Sophie’s life was upended after the crash. Her boyfriend was behind bars, her brother dead, and her home life was in turmoil. Abandoning a career in music, Sophie opted to stay in Colebury in order to take care of her mother, who slipped into a deep depressive state following the accident. However, this choice to stay also meant that she had to deal with her controlling father – a man who refused to acknowledge the sacrifices Sophie made in order to cater to the needs of her family. You wouldn’t blame Sophie for being angry or resentful but her response to the circumstances of her life was the complete opposite. Yes, she’s struggling to live under the roof of a man who doesn’t give a damn about her well-being, but she responds with kindness and hope. She is a ray of sunshine and it was impossible to not admire her bravery and compassion. The circumstances of the fatal car crash never felt right to Sophie and her need to find the truth about what really happened that night leads her right back to Jude.

Second chance romances are my favourite. These romances are often filled with struggles, doubts, and a lot of hurt, but that’s what makes them so beautiful. Love, isn’t all heart and flowers and when two people that have a world of hurt between them choose to fight for that love, it’s impossible to not root for them. This is what made Jude and Sophie romance so beautiful. It was messy and complicated but you could always feel the love between them.With this second chance, they both come to understand how important it is for them to not ignore the elephant in the room, thus enabling them to openly communicate with one another and lean on each other in their time of need. The flashbacks to how they first got together helped establish that connection and made their reunion all the more achingly beautiful.

Steadfast is significantly darker than Bittersweet and though I missed the Shipley farm setting, the glimpses we got of Griffin, Audrey and the rest of the clan were satisfying. However, it was important for us, and for Jude, to prove to himself that he could face the temptations away from the farm and find confidence in his commitment to taking control of his addiction. In doing so, he acknowledges the fact that it’s not a battle to be fought alone. It was an incredible journey, highlighting Jude’s strength and resilience in his battle with addiction.