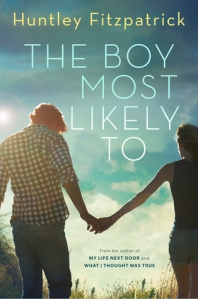 Alice Garrett was The Girl Most Likely To . . . well, not date her little brother’s baggage-burdened best friend, for starters.

For Tim, it wouldn’t be smart to fall for Alice. For Alice, nothing could be scarier than falling for Tim. But Tim has never been known for making the smart choice, and Alice is starting to wonder if the “smart” choice is always the right one. When these two crash into each other, they crash hard.

Huntley Fitzpatrick has done it again. I put off reading this book because as much as I wanted to read Tim’s story, I was worried that the book would veer off into overly angsty territory. Thankfully, while this book does have its fair share of angst, it never felt forced or exaggerated. Instead it read like a teenager who has his fare share of demons to face and is trying to make amends for the mistakes he’s made. This past mistake upends Tim’s world and juggling his recovery with this latest addition to his life becomes and ongoing struggle for him.

I won’t spoil this plot point but it’s a trope that I usually hate because this dilemma is usually messily executed. However, I was pleasantly surprised at how mature and realistic Tim and everyone involved handled the situation. It’s a tangled web of confusion, regret, uncertainty and most of all acceptance. I love how Tim, as terrified as he was, owns up to his mistake and take on the responsibility of facing the consequences of his actions. While the outcome of the situation was very predictable, I appreciate the way the character’s adapted and learnt from it. Tim’s growth was central to this plot point and I loved seeing him take control of his demons and strive to do the best for himself and those he cares about.

I thought this book would be a lot more romantic than it was but this story is mainly about Tim and Alice’s individual journey and how they come together in the process. There was a hint at a connection between these two in My Life Next Door and I was excited to explore the dynamic between them in this book. The romance took its time to develop as both Alice and Tim had their own responsibilities to face, but the moments we do get of them as a couple were tantalizing.

It’s always a pleasure to catch up with the Garrett’s. This family is chaotic but lovable. I really liked that we got to explore more of the household dynamic and how being part of a large family can feel like both a blessing and a curse. What with Alice’s father still recovering from the events in My Life Next Door, the older kids are left to hold down the fort in his absence. To Alice, that means babysitting, trying to keep the family business open, sorting bills and every thing in between. Her own life is put on hold as she carries the weight of the families responsibilities and it’s understandable why she might grow to resent it at times. That doesn’t mean that she doesn’t love her siblings and her parents; sometimes a girl just needs a break to focus on her own ambitions.

To conclude, The Boy Most Likely To is a story of a troubled boy who’s so desperately trying to right the wrongs in his life and a girl weighed down by the responsibilities placed on her shoulders. Somewhere along the line these two souls find a kindred spirit in one another. I loved following Tim and Alice’s journey. Huntley Fitzpatrick has once again reaffirmed her position as one of my favourite contemporary authors.

4 thoughts on “Review: The Boy Most Likely To by Huntley Fitzpatrick”