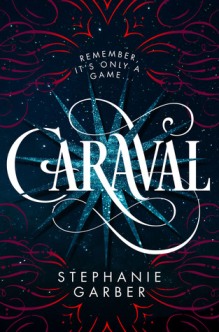 This week I am waiting on
Caraval by Stephanie Garber

Goodreads Summary
Before you enter the world of Caraval, you must remember that it’s all a game . . .

Scarlett has never left the tiny island where she and her beloved sister, Tella, live with their ruthless father. Now Scarlett’s father has arranged a marriage for her, and Scarlett thinks her dreams of seeing Caraval, the legendary, once-a-year performance where the audience participates in the show, are over.

Then, Scarlett’s long-dreamt of invitation to Caraval finally arrives. So, Tella enlists a mysterious sailor’s help to whisk Scarlett away to this year’s show. But as soon as the trio arrives, Tella is kidnapped by Caraval’s mastermind organizer, Legend.

Scarlett has been told that everything that happens during Caraval is only an elaborate performance. But she nonetheless soon becomes enmeshed in a game of love, heartbreak, and magic with her sister, with Legend, and with the other players in the game. And whether Caraval is real or not, she must find Tella before the five nights of the game are over, a dangerous domino effect of consequences is set off, and her sister disappears forever.

Based on the synopsis alone I would say that the main relationship in this book is the one between these two sisters and I am all for a sisterhood. The idea of the Caraval itself sounds a lot like The Night Circus so it will either be a hit or miss but I’m leaning more towards a hit. We know, Tella is kidnapped so there seems to be a sense of urgency to Scarlett’s journey and a lot the way her path with test her limits and lay the foundations of the things to come in this series.

4 thoughts on “Waiting on Wednesday: Caraval”