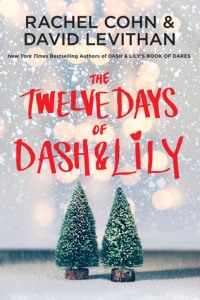 Goodreads Summary
Dash and Lily have had a tough year since readers first watched the couple fall in love. Lily’s beloved grandfather suffered a heart attack, and his difficult road to recovery has taken a major toll on her typically sunny disposition.

With only twelve days left until Christmas—Lily’s favorite time of the year—Dash, Lily’s brother Langston, and their closest friends take Manhattan by storm to help Lily recapture the holiday magic of New York City in December.

Told in alternating chapters, The Twelve Days of Dash & Lily reunites two beloved characters and is bound to be a Christmas favorite, season after season

I had no idea that there was going to be a new Dash and Lily book until last week. There are so many reasons why I’m excited about this book. To start, the ending of Book of Dares basically had me needing more. I  needed to know how things were going between Dash and Lily. Second, I am a sucker for a good Winter romance. I’ve said it before but I find that there just aren’t enough Winter contemporaries out there. So to have a book not only check in with some familiar faces but also continue to embrace the magic of Winter is a plus for me.

10 thoughts on “Waiting on Wednesday: The Twelve Days of Dash and Lily”