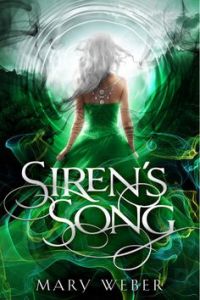 With the loss of Tulla still fresh in mind, Rasha’s fate unknown, and Lord Myles taken over by the dark ability, Nym and the few Bron soldiers rush to warn Cashlin’s queen. Only to discover it may already be too late for the monarch and her eerie kingdom. As the Luminescents are sifting through Nym’s past memories and the queen is reading into her future, Nym is given a choice of how to defeat Draewulf, but the cost may be more than she can bear. And even then there are no guarantees.

With that reality burrowing into her bones—along with the guilt of the lives she will sacrifice—Nym returns to her homeland of Faelen to raise an army of peasants through promises of freedom. But when the few friends she has left, along with the world and citizens she loves, are staring down the face of a monster and his undead army, will Nym summon every element her blood is capable of controlling . . . or surrender to a different strength—one of sacrifice?

Because in the end, death may be more merciful for them all.

Siren’s Song is a solid conclusion to a wonderfully engaging series. The stakes are higher than ever and in the final installment of the trilogy, Nym is set to take down Draewulf, no matter what the cost. Siren’s Fury took us to the kingdom of Bron and Tulla giving us a glimpse into the wider political and social landscape to the world. Siren’s Song further expands on this as we travel to the kingdom of Cashlin and then back to Faelene, finishing where we started. What I love about this world is how each kingdom has its own set of beliefs, traditions, political and cultural landscapes that distinguishes them from one another. What’s also impressive is the way that Weber has managed to expand our understanding of the magic in this world, giving us some insight into the history of the Uathúils and how they are connected to the land they inhabit.

Nym’s journey remains to be one of my favourite aspects of the series. In the beginning, Nym was filled with nothing but self-loathing, believing her gift was nothing but a curse. Now, she embraces her identity and her abilities. She is relentless in her determination to stop Draewulf and save those she loves.

Now, we can’t forget about Eogan. He is dealing with both the physical and psychological ramifications of the events in Siren’s Fury. However, in spite of this he is still Nym’s greatest ally. His support for her knows no bounds and while he does pull away from her for a time, his feelings for her never wane. I love getting to see them work together as a team.

Our secondary characters are also given a chance to shine and I loved getting to peel back the layers to some of our most fascinating character, such as Lady Isobel. The action does not stop as Draewulf seeks to bring an end to royal bloodlines of the five kingdoms and secure his dominion. He is relentless in his pursuits and it all leads to a final, epic battle where heartbreaking sacrifices are made.

I could not get enough of this book. The writing is beautiful, the characters are complex, the romance is stunning and the world is so rich in its magic and development. If you’re on the hunt for your next fantasy series then I would highly recommend you pick up the Storm Siren trilogy.