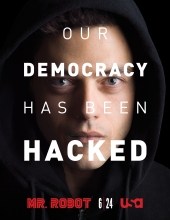 It’s been a while since I’ve been so immersed in a TV show that I simply had to write about it. I’ve seen comments on Mr. Robot floating around the internet for a while but I never gave much attention to it, mainly because I thought the title was a bit naff. However, once I got into the show I couldn’t stop watching it.

The story follows Elliot Alderson, a cyber security engineer that suffers from social anxiety and turns to hacking as a way of curbing his loneliness and makes an impact on the world. This show covers a lot of social and personal issues such as, corporate consumerism and corruption, depression, social anxiety and identity. I’ll be the first to admit that I know nothing of hacking and I’m not the most tech savvy person but after reading an interview with the creator of the show, Sam Esmail, I appreciate the level of care they took in making that community and the hacking themselves very realistic and believable, heck I had to google so many terms like “honeypot” so I could understand what they were talking about.

What I really appreciated was how they explored the way that hacking is utilized as a way for Elliot to establish a connection with the world. Elliot is a hacking genius in my book but where his intelligence shines he lacks in social functions. As a character, Elliot internalizes a lot of his thought and feelings. They are conveyed to us through the voiceovers. To us this is an insight the rest of the characters are privy to and so his interactions with them are seen to be awkward and standoffish. I must say Rami Malek absolutely carried the show for me. His portrayal of Elliot was so raw and gritty you couldn’t help but root for him.

One of the things I love the most about Mr. Robot is the way that they utilize the voiceover. Elliot is the definition of an unreliable narrator. The fact the voiceovers are used as a means of talking directly to us is another way of not only drawing us into the story but it also highlights the fact that we’re never 100% sure that we know what’s real and what is a figment of Elliot’s imagination. It also makes Elliot’s accusations in episode 9, telling us “we knew all along, didn’t you?” that much more impactful because technically we didn’t know what was going to happen but we knew that some elements of Elliot’s world wasn’t in fact his reality. The dynamic between Elliot and Mr. Robot was another highlight for me and Christian Slater was absolutely perfect in his role

It took a while for me to actually understand why fsociety wanted to take down Evilcorp but what I do know is that it took a lot of planning and positioning from every player to make it succeed. We also get to meet some the players and power plays being made within the company itself which adds another layer of intrigued. Each character has a role to play and the first season set in motion a bunch of plot points that will surely be explored in season 2.

If what I’m talking about seems vague to you it’s basically because it’s hard to talk about a lot of the events without revealing spoilers and to be honest I’m still trying to find the answers to a lot of the questions I have after finishing the season.

If you have watched Mr. Robot I’m going to basically air a bunch of questions/musings I had and if you like to share any theories I’m all ears.