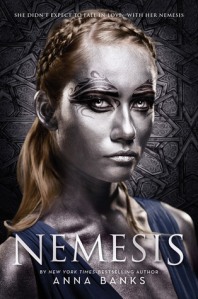 This week I am waiting on
Nemesis by Anna Banks

Goodreads Summary
The princess didn’t expect to fall in love–with her nemesis.

Princess Sepora of Serubel is the last Forger in all the five kingdoms. The spectorium she creates provides energy for all, but now her father has found a way to weaponize it, and his intentions to incite war force her to flee from his grasp. She escapes across enemy lines into the kingdom of Theoria, but her plans to hide are thwarted when she is captured and placed in the young king’s servitude.

Tarik has just taken over rulership of Theoria, and must now face a new plague sweeping through his kingdom and killing his citizens. The last thing he needs is a troublesome servant vying for his attention. But mistress Sepora will not be ignored. When the two finally meet face-to-face, they form an unlikely bond that complicates life in ways neither of them could have imagined.

Sepora’s gift could save Tarik’s kingdom from the Quiet Plague. But should she trust her growing feelings for her nemesis, or should she hide her gifts at all costs?

The dynamic between Speora and her dad sounds complicated and manipulative and so I’d quite like to see what their relationship is like. Tarik also sounds like a really interesting character especially as he’s only just taken over rulership of his land. Plus you’ve got the question of political/territorial wars and how Sepora and Tarik maneuver themselves around these political situations. I feel like the question of trust will be a focal point in the book. Plus I’m a sucker for a forbidden romance.

10 thoughts on “Waiting on Wednesday: Nemesis”