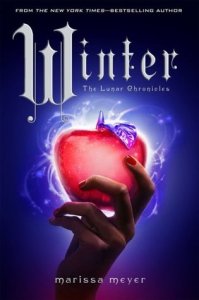 Winter (The Lunar Chronicles #4) by Marissa Meyer
Published: November 10th 2015 by Feiwel and Friends
Rating: 5 Stars
Genre: Fairy-tale retelling, Young Adult, Sci-fi, Fantasy.
Source: Purchased from Amazon
Find: Goodreads | Amazon | Waterstones
Goodreads Summary
Princess Winter is admired by the Lunar people for her grace and kindness, and despite the scars that mar her face, her beauty is said to be even more breathtaking than that of her stepmother, Queen Levana.

Winter despises her stepmother, and knows Levana won’t approve of her feelings for her childhood friend—the handsome palace guard, Jacin. But Winter isn’t as weak as Levana believes her to be and she’s been undermining her stepmother’s wishes for years. Together with the cyborg mechanic, Cinder, and her allies, Winter might even have the power to launch a revolution and win a war that’s been raging for far too long.

Can Cinder, Scarlet, Cress, and Winter defeat Levana and find their happily ever afters?

I’m still recovering from this emotional roller-coaster. I just can’t quite believe it’s over. This book is without a doubt the best in the series and is the perfect ending.

Winter picks up a few weeks after Cress and it is action packed. After all the planning and the cat and mouse chase, plans are being put into motion. There is no hiding and everything in this book leads to that final phenomenal climactic showdown between Levana and Cinder. After exploring all the earthen locations in the first three books, the majority of Winter is set on Luna and I loved getting to see the social structure and the role that their ‘gift’ plays in their society.

I have to say this entire series is beautifully crafted. There has never been a dull moment. What I love so much about these books is the way that Marissa succeeded in bringing all these characters together and entwining their stories. For anyone who is looking to explore fairy-tale retellings, I’d recommend starting with the Lunar Chronicles. The events that are so distinct to the fairy-tales are beautifully woven in throughout the plot. There was never a moment that felt misplaced and while you can definitely identify the fairy-tales components, the characters and the world remains to be completely unique.

I must say, the highlight of the series for me will always be the characters. Every single one of our main characters had a very distinct voice and I loved seeing their progression throughout the series. In this book we meet Winter and she was an absolute delight. As Levana’s step-daughter, Winter had the front row seats to all of Levana’s horrific actions. She has also made the decision to not use her Lunar abilities. The consequence of this is that her mental state slowly deteriorates; this mean she suffers from hallucinations. However, while the majority of the Lunar aristocracy look at Winter as a nuisance, her beauty still captivates them and this mentally unstable perception is sometimes utilised as a way for Winter to disguise her strength and awareness of the political tension on Luna.

As well as Winter, our other main characters also play a very prominent role. Cinder is ultimately the one that brought everyone together and in some way each of our main 9 (Iko included) characters are considered outsiders. However, together they make up one dynamic team and I absolutely adored the friendship and the connection between them. From the banter, to the relationships and the way they constantly have each other’s back; these outsiders are a family and nothing will be able to tear apart the bond they’ve created. The Rampion crew are basically squad goals.

I cannot find a single fault in this book. The anticipation and the build up to this final showdown was exhilarating, unpredictable and emotional. Each character was put in perilous danger and I was so scared about the possibility that they wouldn’t make it. I am definitely going to miss this crew and I am so excited to get my hands on Stars Above.