Finnikin of the Rock (Lumatere Chronicles #1) by Melina Marchetta
Published: September 29th 2008 by Viking Australia
Rating: 5 Stars
Genre: Fantasy, Adventure, Magic, Young Adult
Source: Purchased from Amazon
Find: Goodreads | Amazon | Book Depository
Goodreads Summary
Finnikin of the Rock and his guardian, Sir Topher, have not been home to their beloved Lumatere for ten years. Not since the dark days when the royal family was murdered and the kingdom put under a terrible curse. But then Finnikin is summoned to meet Evanjalin, a young woman with an incredible claim: the heir to the throne of Lumatere, Prince Balthazar, is alive.

Evanjalin is determined to return home and she is the only one who can lead them to the heir. As they journey together, Finnikin is affected by her arrogance . . . and her hope. He begins to believe he will see his childhood friend, Prince Balthazar, again. And that their cursed people will be able to enter Lumatere and be reunited with those trapped inside. He even believes he will find his imprisoned father.

But Evanjalin is not what she seems. And the truth will test not only Finnikin’s faith in her . . . but in himself.

This is one of those reviews where you just don’t know where to start because there is so much to talk about. To start, I’ll say that this is the first book I’ve read by Melina Marchetta and I am kicking myself for not reading this sooner. ‘Finnikin of the Rock’ is the first book in the Lumatere Trilogy and from the get-go I was hooked. This book is full of rich, intricate world building, and an array of complex and fascinating characters that are easy to relate to. 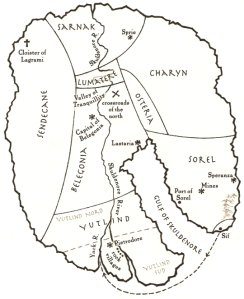 I will admit when I started the book I was confused by the world because of the multitudes of locations and different cultures that we come across. However, this didn’t really bother me as much because the more I read, the more the pieces came together which resulted in some rich world building which has essentially set the foundations for the next book. It also helps having a map included in the book as you can then visualize the locations and also track the movements of our characters.

Before I continue I just want to mention that Melina’s writing is absolutely stunning. The beauty in the writing felt like such a contrast to the harsh brutality of this world that’s been created which makes it such a captivating read.

Now onto the actual story. To me, it was the characters that made the story so great. Despite the fact that the story is mainly told from Finnikin’s perspective, we meet an array of characters, all that have a depth to them that I really enjoyed exploring.

The book follows Finnikin and let me tell you he and I had some disagreements. When we first meet him we learn that following 10 years of exile from their homeland, Finnikin, along with his guardian, Sir Topher, are trying to find and establish a new land for his people to inhabit. Having lost hope in ever returning to his homeland, Finnikin’s plans are quickly thrown into chaos when he meets Evanjalin who claims that there is a way for them to return home. Naturally, Finnikin is skeptical and he treats Evanjalin as a burden at first. We see that Finnikin can be harsh in his treatment of people and stubborn in his determination to put the past behind him. However, it was these qualities that I also found to be quite endearing. He is full of self-doubt in himself and his abilities to lead, he is scared of giving in to this sense of hope after going so long without it. Some of the choices he makes are questionable but that just makes him such a compelling and real character that I couldn’t help but root for him.

Again Evanjalin was another character whose actions had me seriously questioning my trust and judgement in her. However, yet again I was able to understand why she made these choices and that sometimes desperation can lead to some tough decisions. This story proved to be just as much Evanjalin’s journey as it is Finnikins. She is stubborn, determined, mysterious and very vulnerable. Her life in exile has not been easy and I admired her strength when I found out some of the things she had to endure. What I really appreciated about her was the fact that in this world there is a harsh brutality to its nature, which often leads to conflict and action. However, with the exceptions of one or two situations, Evanjalin is not a warrior among warriors. Instead her strengths lie in her intelligence, her faith, and her empathy. It’s her hope that inspires people to follow her, even at times where you know she’s omitted the truth. Her journey in this book left me in awe and I really felt myself rooting for her and believing in her.

I think it’s safe to say that the key theme in this book is identity. Here we have a community of people that were once united in their kingdom and are now scattered among the world losing all sense of hope and trust due to the brutality and horror’s that they’ve seen. These people are not perfect. In their darkest hours they have turned their back on the suffering of their kin and the questions we get in this book is how can they get back to what they were when clouded with all this guilt and sorrow. How can they hope after being exiled and forced to endure such horrors. Like I said earlier, it is Melina’s understanding of the complexity of human nature that really makes this book stand out for me.

This understanding of the human nature is also highlighted in the way that our main villain and his actions often appear off the pages and we never interact with this villain. In its place we explore the evil within us. How people can make such awful choices, and how desperation can lead to betrayal, and how to hope and find goodness in the evil that they’ve either witness, experience or inflicted.

I’m excited to start the next book in this series, ‘Froi of the Exiles’, especially since the book will apparently focus on Froi, a character that has inflicted such pain but by the end of the book show’s some possibilities of redemption. However, before I get started, I think I’m going to re-read a slightly happier book since I have a feeling that Froi’s journey will take us to some quite dark places like Finnikin did.

3 thoughts on “Review: Finnikin of the Rock by Melina Marchetta”