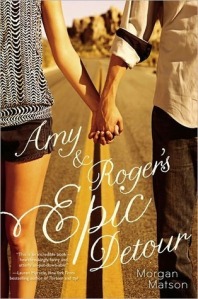 Amy and Roger’s Epic Detour by Morgan Matson
Published: May 4th 2010 by Simon & Schuster Books for Young Readers
Rating: 4 Stars
Genre: Contemporary, Young Adult, Romance
Source: Purchased from Book Depository
Find: Amazon | Book Depository | Goodreads
Goodreads Summary
Amy Curry is not looking forward to her summer. Her mother decided to move across the country and now it’s Amy’s responsibility to get their car from California to Connecticut. The only problem is, since her father died in a car accident, she isn’t ready to get behind the wheel. Enter Roger. An old family friend, he also has to make the cross-country trip – and has plenty of baggage of his own. The road home may be unfamiliar – especially with their friendship venturing into uncharted territory – but together, Amy and Roger will figure out how to map their way.

When it comes to contemporary books I tend to place a greater focus on the character development than the world building and Morgan Matson excels at this. This book takes us on a journey both physically and mentally as our female protagonist, Amy makes the journey from one end of the states to the other leaving her old life behind to join her mother in their new home following the death of her father. Joining her on this trip is Roger who was journeying to Philadelphia to spend the summer with his father.

Out of the two characters Amy was definitely more of a closed book. However, the reason behind the walls she built around herself is understandable as she reels from a personal tragedy that shook her world. Through Amy we explore the way that these personal tragedies have an emotional and mental impact on the individual and also how it affects those they were close to. We see that Amy had pushed everyone she knew and loved away from her and became isolated in her grief. Throughout this journey and her interactions with Roger we see her slowly take down those walls as she frees herself from the burdens she kept buried and slowly opens up.

I completely adored Roger. As a character he was kind, gentle and even though he knew the basics about what Amy was dealing with, he never forced her to confide in him and respected her wishes which in turn made Amy feel comfortable in his presence to the point where she willingly opened up to him. I was worried when I read about the ex girlfriend situation and hoped that it wouldn’t turn into one of those situations where the guy is pining for the ex and is completely oblivious to how that might affect the female protagonist. Thankfully it wasn’t a focal point in the book and instead of the pining situation I felt that Roger’s journey was to find closure in that relationship.

I appreciated the way Matson explored the relationship between Amy and Roger. I think some people would say that their relationship felt rushed due to the short time span but to me it felt like a natural progression. This is due to the fact that the time Amy and Roger spend together is spent in such close proximity. Every moment in this book is shared between the two and so their relationship never felt like it was being forced or too rushed. They went from strangers, to friends and eventually more than that.

The layout of the book was a wonderful delight. I love it when authors include snapshots from the characters life. In this case it came in the form of the playlists created along the journey and the snippets we get of the scrapbook. It’s a factor that really makes you feel like you’re part of this journey as you get a visual depiction of some of the locations they visit. This aspect also served as another way for us to get to know Amy and Roger through the more mundane aspects of their personalities such as their taste in music, their quirks, and their likes and dislikes.

I say this all the time with contemporaries but at the end I kind of wanted more. I wanted that assurance that the connection Amy and Roger had endured. Thankfully though I found out that we get a little cameo from them in Second Chance Summer and they’re also mentioned briefly in Since You’ve Been Gone.

I’d definitely recommend this book to anyone looking for a summer read.